Wessler is proud to announce Jeff Ballard, P.E., as this month's Employee Spotlight! Jeff currently serves as a senior project manager in our Wastewater Group, with structural engineering being his primary area of expertise.

Jeff joined the Wessler team in 2017 and has played a key role in projects across all of our services. We had him answer the questions below so that we all can get to know him better!

What are your roles/responsibilities at Wessler?

Why were you interested in pursuing a structural engineering career path?

I have always liked building things and I had a Mechanical Engineering professor who taught with much enthusiasm. The subject matter really clicked with me.

What does the Wessler Way mean to you?

Working together for the overall good of the client.

Play Frisbee with my son Jackson, family time (my wife and I have 4 kids), home projects, fishing, camping, and last but not least – time with grandchildren (three-year-old grandson and eight-month-old granddaughter) in Virginia.

Tell us one thing most people probably don’t know about you.

First job out of Purdue was as a Bridge Engineer for the Chessie System Rail Roads in Huntington, West Virginia.

What are some things you haven’t done yet that you would still like to do? 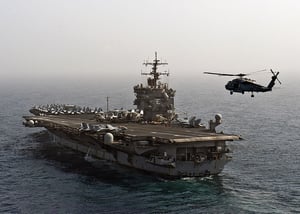 What is the best vacation you’ve been on?

Our second-oldest son, Brett (33), is a helicopter pilot in the U.S. Navy. His second deployment with the USS Enterprise to the Middle East as a helicopter pilot occurred in November of 2012.  On their return trip to Norfolk, VA, they stopped at Jacksonville, FL – dropped off about 1,500 sailors and took on about 1,500 friends and relatives of those remaining on the ship.  This is the Navy’s way of sharing all the info about life on the carrier with family and friends.  They had flight demonstrations, tours of the ship, weapons demonstrations, all types of demonstrations about the Navy’s capabilities.  The best memory I have is on the last day of the cruise - a Sunday morning in November 2012. While approaching the Norfolk Navy base, I - and another Dad I had met on board - went up to the top level of the tower (outside in the blistery cold November air) and watched both of our sons fly their respective helicopters off the ship and return to Jacksonville Naval Air Station.

What would be the first thing you buy when you win the lottery?

Diet Mountain Dew and Tylenol for all the headaches the winnings will create. After that, I would probably donate to some worthy causes and go on an extended vacation!