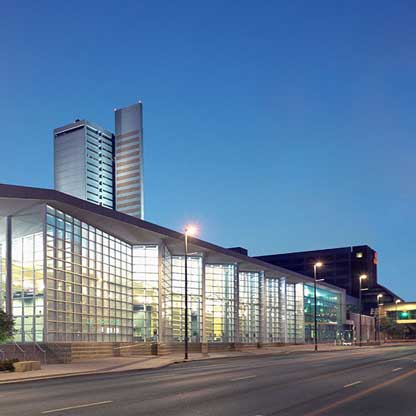 Note: Tyler Hammerle is a project engineer at Wessler Engineering and just attended his first Indiana Water Environment Association (IWEA) Annual Conference. We asked him to write about some things he took away from the 2019 technical sessions he attended. Below is a summary of a presentation on activated sludge, in Tyler's own words.

For the first time ever, the IWEA hosted its Annual Conference in Fort Wayne, Indiana. Located at the Grand Wayne Convention Center, there were numerous exhibitors and many intriguing presentations! My favorite presentation was The O&M of (Most) Activated Sludge Processes, which was the first presentation on the opening day of the conference. In summary, a panel of superintendents and operators covered the pros and cons of different activated sludge processes in Indiana.

First up was Rhonda Anderson, superintendent for the Gary Sanitary District. The Gary wastewater treatment plant (WWTP) is a conventional activated sludge plant with average flows around 48 million gallons per day (MGD). She highlighted how the flow-through process treats large amounts of flow at the plant. Some cons are replacing 30,000 diffuser membranes within the 20 million-gallon capacity aeration basins and the energy costs associated with ten 125 horsepower (HP) return activated sludge (RAS) pumps that are rightfully named “Big Bertha."

The next panelist, John Barlow, oversees another conventional activated sludge plant in Muncie. The Muncie plant is running close to its design flow of 24 MGD, but with low loads due to the rain Indiana has had this year. Though the last aeration basins were added back in 1956, the plant recently had some upgrades in 2015. The plant upgraded to new high-speed turbo blowers where John is seeing energy savings between $5,000 to $8,000 on his monthly bills. Also, due to low flows, the most open valves (MOVs) are controlling the speed of the blowers, which helps the plant control its dissolved oxygen (DO) levels.

Ryan Paschal, operator of the Middletown WWTP, took the microphone next to discuss his trickling filter. This plant runs between 0.8 – 0.9 MGD, with a max flow of 1.2 MGD. The fixed film process is able to achieve 98% to 99% removal per month. He believes one of the pros is its ability to retrofit into existing aeration basins and increase the flow capacity. One of his cons was having to deal with filter flies, but believes they’re not as bad as other plants he’s seen.

Next we heard from Mick Reese, former superintendent of the Middlebury plant, who discussed the plant’s oxidation ditch arrangement. Mick likes the flexibility of the oxidation ditch's outer and inner rings. Controlling the aerators, he's able to create anaerobic and anoxic zones in the rings to achieve denitrification and biological phosphorus removal.

The last panelist was Bob Roudebush with the TriCo Regional Waste District, describing their vertical loop reactors (VLRs). Bob described them as oxidation ditches turned on their side. One pro is having the flexibility of running the VLRs either parallel or in a series, depending on incoming flow and load conditions. The VLR has a small footprint and can run at higher mixed liquor suspended solids (MLSS) of 5,000 to 6,500 mg/L. One con Bob mentioned is the lack of access to lubricate the aerators' gear reducers because they are very close to the water surface level in the reactors.

In my first experience at the IWEA’s Annual Conference, hearing the viewpoints of multiple wastewater professionals and their experiences with different types of treatment processes was a fantastic way to start the conference. This information really helped prepare me for the rest of the educational opportunities throughout the day. Listening to the pros and cons of the different activated sludge processes provided me with something to consider in future designs as I move forward in my career.

Our Wessler team had a great time at IWEA this year. If you enjoyed this post, feel free to share it with a friend!