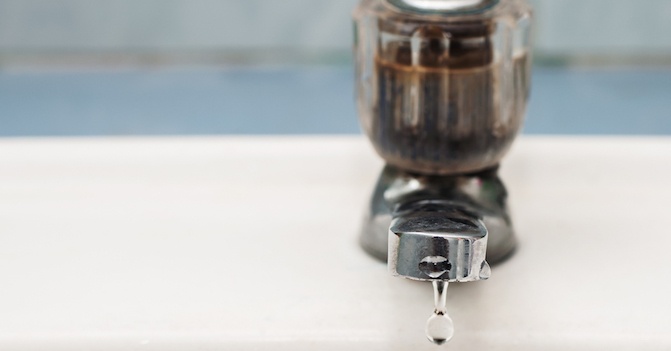 It wasn’t long ago that a simple bar of soap was regarded as the be-all and end-all solution to discourage children from using four-letter words, at least in the company of adults. If you have ever had the privilege of experiencing that sharp, bitter taste of a fresh bar of Irish Spring, then you know that nothing ever quite tastes the same again. Candy never tastes quite as sweet, soda never quite as fizzy and brushing your teeth becomes a much desired activity. One may conclude that a simple bar of soap is an effective means of eliminating four-letter words from a child’s vocabulary.

What if I told you there was a new four-letter word and soap and clean water does nothing to diminish its damaging effects on children? That four-letter word is LEAD…and it’s on the tip of the nation’s collective tongue. But where does lead come from and how does it infiltrate our drinking water? How can you detect and prevent lead exposure in your home? What are federal and state governments doing to protect drinking water systems? These questions, and more, are addressed below as we discuss lead and its presence in our drinking water systems.

Lead, much like asbestos, was widely praised throughout much of the 20th Century for its cost-effective and beneficial contributions to the housing industry. Advertisements such as “the more home means to you…the more you’ll appreciate Dutch Boy protection,” an advertisement for Dutch Boy White Lead paint, were not uncommon throughout the early 1900s.

Also not uncommon in the early 1900s was the use of lead pipes for interior plumbing and, more recently, lead solder for joining interior copper pipe fittings. If your home was built prior to 1986, there is a good chance that your interior plumbing contains lead-based materials. Often times, when lead is detected in one’s drinking water, the source of lead can actually be traced back to lead pipes or lead solder present within the home.

In short, in 2015 the source of Flint’s drinking water was the Flint River. The Flint River is high in iron, a corrosive substance. High concentrations of iron in the drinking water source went untreated and, over time, eroded protective mineral layers from interior plumbing amongst residences of Flint, Michigan. Residences, many built prior to 1986, that were constructed with interior lead pipes or lead solder then began leaching high concentrations (above federal action levels) of lead into residential drinking water, exposing a large population of children and adults to the toxic metal.

How Can You Detect and Minimize Lead Exposure Within Your Home?

Since replacing interior lead-based pipes and solder throughout your entire home may not be a cost-effective option, the Environmental Protection Agency (EPA) has provided the following steps to minimize your exposure to lead:

How are Federal and State Governments Preventing Exposure to Lead?

EPA’s Lead and Copper Rule, issued in 1991, requires public water systems to control the corrosivity of water. The regulation also requires systems to collect tap samples from sites served by the system that are more likely to have plumbing materials containing lead. If more than 10 percent of tap water samples exceed the lead action level of 15 parts per billion, then water systems are required to take the following actions:

For more information on lead in drinking water, testing methods and steps you can take to minimize exposure, please contact the Safe Drinking Water Hotline at (800) 426-4791 or visit their website at http://www.epa.gov/your-drinking-water/basic-information-about-lead-drinking-water.