Programming - What is it and How Can it Help Your Operation? 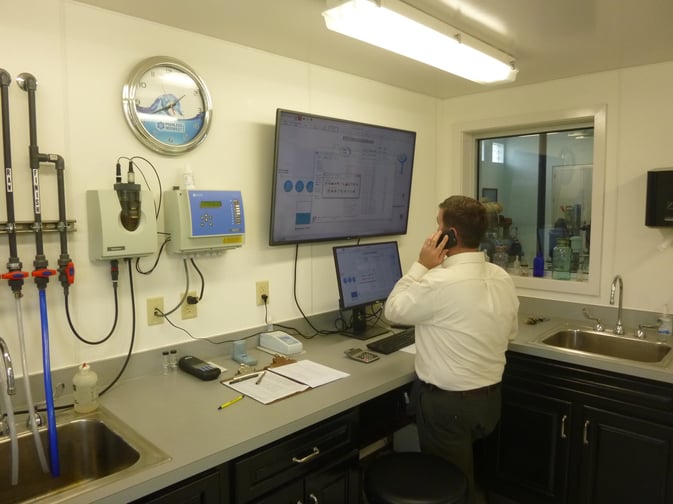 If you’ve ever had the privilege of speaking with any engineer for any length of time, you’ll realize that - in addition to being good at solving problems with math and physics - engineers have also mastered the art of using acronyms in every day conversation.

Acronyms are everywhere in all forms of engineering, but controls engineering has to rank pretty high on the list of frequent acronym use when compared to other engineering fields. Spend five minutes speaking with a controls engineer about his/her job and you will probably hear terms, such as PLC, HMI, SCADA, VFD, UDT, PNP, and countless others. Furthermore, the more detailed the conversation, the more acronyms used, ultimately rendering the conversation nearly incomprehensible to those who aren’t controls engineers. This article is aimed at clarifying a few of these acronyms that are so commonly used and making them less scary to those who don’t use these terms on a day-to-day basis.

Let’s start with examining one of the most broadly used acronyms in our industry today, the SCADA system.  SCADA is the acronym used for Supervisory Control and Data Acquisition systems in an industrial environment.   It’s just a fancy way of defining the computers and software required to run an industrial facility by use of a graphical interface. At the most basic level, a SCADA system can contain one computer, one monitor, and the software required for an operator to interface with the computer to control the facility. From that basic example, SCADA systems can grow in complexity and scale to meet the needs of larger plants, facilities and municipalities. A SCADA system is not an off-the-shelf solution. It is customized for each situation by piecing together the field computers and software to provide a useful solution for the facility in which it is installed. Let’s expand a little more on our newly understood acronym - and learn a few more - as we get into more detail.

The field computers used in a modern SCADA system are special types of computers manufactured for industrial use, known as Programmable Logic Controllers, or, you guessed it, PLCs. PLCs are wired to devices  that either provide status of a process condition (i.e. the level inside a tank) or allow control (i.e. start a pump). The signals to and from these devices are known as Inputs and Outputs (I/O) to the PLC. Controls engineers are then able to use software to program the PLC on how to control the process.. For example, a controls engineer may program a PLC to keep the liquid level in a tank at a certain level by operating a valve that allows liquid to enter the tank. Under normal operating conditions, the liquid in this tank is used for various reasons, causing the level in this tank to naturally drop.  If the tank level drops below a certain level, the PLC can open a valve to allow more liquid to flow into the tank, returning it to a normal operating level. This example is then expanded to contain all the monitoring and control loops for all of the equipment located in close proximity to the PLC itself. 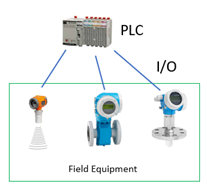 So now that we know what a PLC is and how it is used, we can move on to the next acronym - the Human Machine Interface, or HMI for short. Once the Controls Engineer programs the PLC to control the process, there needs to be an easy way for an equipment operator to view and control their process. The HMI is comprised of the hardware and software to provide the graphical user interface (GUI) with the PLC. Often, the Controls Engineer will program the HMI to include graphical representations of the field equipment that is controlled through the PLC. If an operator wants to start a pump, close a valve, etc. they can select the graphical representation of that device on a screen and push buttons to start or stop the pump or motor, close a valve, and so on. 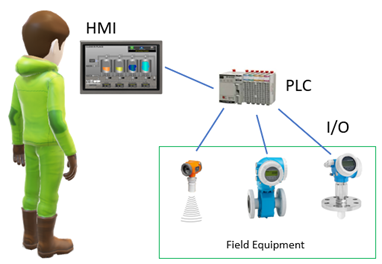 Now that we understand the components of a basic SCADA system, it is easy to see how these components can be scaled up to provide a solution for facilities that require more than just one PLC. An example of a little more complex SCADA system is illustrated as follows: 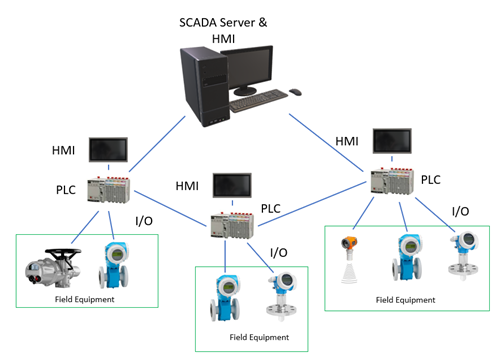 In this example, you can see the components that we are now familiar with, all networked to a centralized SCADA server and HMI. At its most basic level, this server acts as the central point of Control (the “C” in SCADA), and provides the repository for the Data Acquisition (the “DA” in SCADA) for the facility. This example is a common type of SCADA architecture seen in today’s industry.