The report is titled “Food Waste to Energy: How Six Water Resource Recovery Facilities are Boosting Biogas Production and the Bottom Line.”

One of those six WRRF's is right here in Indiana and happens to be a Wessler client–the City of West Lafayette.

The City of West Lafayette and Wessler Engineering worked together to utilize the Clean Water State Revolving Fund to finance a Fats, Oils, and Grease (FOG) program and cogeneration facility at its WRRF.  The FOG program generates an increase of up to 30% in methane gas production. The methane gas is then used to produce electricity and provide environmental benefits. The City anticipates a reduction in greenhouse emissions and energy savings of over $7.2 million over the next 20 years. Approximately 25% of the plant’s power needs are supplied by methane-generated electricity.

Direct FOG injection also generates tipping fees—a new revenue source. Commercial customers can haul waste grease to the WRRF for disposal, rather than out of town, reducing trucking volume and hauling costs. Electric vehicle charging stations were also added adjacent to the digesters. Now, electricity generated from the micro-turbines can be used to power the City’s future electrical vehicle fleet.

How Does It Work?

Below is a series of photos from the EPA report. The images show the process of how food waste from Purdue University gets transferred to the WRRF digesters to help increase biogas production. 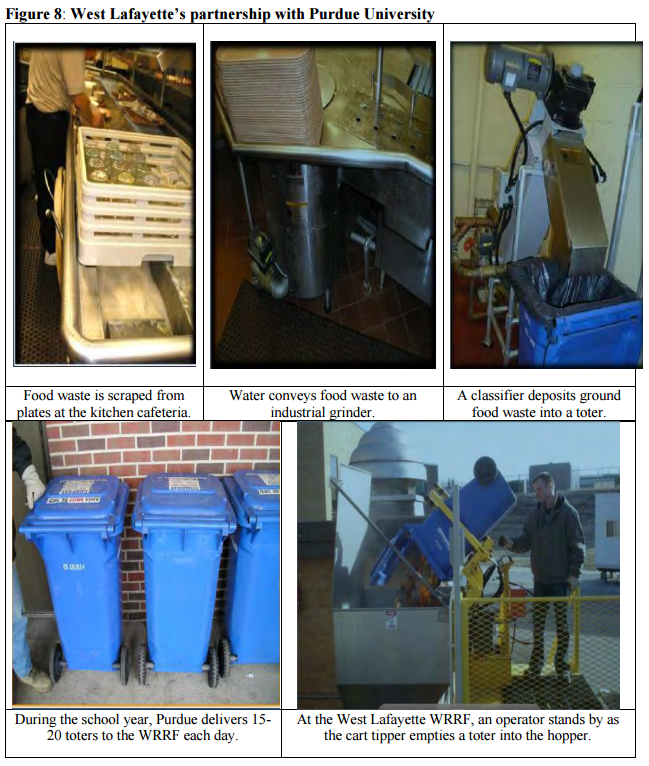 Each of the six facilities that were interviewed reported that codigesting with food waste and FOG has greatly increased biogas production.

One facility, The East Bay Municipal Utility District (EBMUD) in the San Francisco Bay area, is energy positive. EBMUD began codigesting in 2002, and in 2012 EBMUD became the first wastewater treatment plant in North America to produce more renewable energy onsite than is needed to run the facility. The facility currently generates about 129% of its energy needs on-site. The surplus is exported and sold.

Food Waste to Energy in a Cogeneration System

Let’s break down the definition of cogeneration.

Cogen (as it is commonly referred to) is:

By definition, a cogeneration system is more efficient than a utility operated central power plant. This is because thermal energy that would otherwise be wasted is captured for use at the facility. The resulting decrease in the need for purchased electrical power and natural gas can generate substantial savings for the WRRF.

WRRF's can boost their biogas production in their digesters by using food waste and FOG. This is how food waste gets turned into energy. 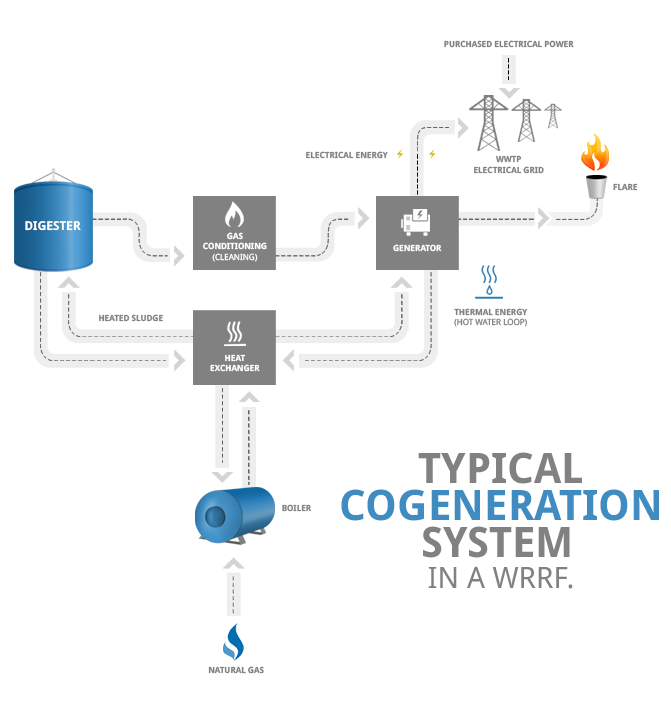 Finally, it is worth noting the investment costs and return on investment of a project like this. The EPA report includes some very interesting financials for all six facilities interviewed.

In the case of West Lafayette, not only does the FOG and Cogeneration system reduce greenhouse gas emissions and save energy costs, it brings in extra revenue through tipping fees. Here is the table from the report that shows the cost, savings and revenue for each of the six facilities. 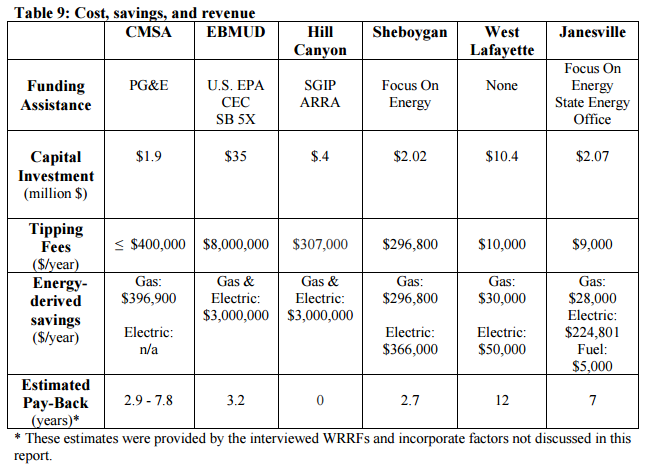